Quilcene Historical Museum invites you to join us for May’s Vote, a play by Toni Douglass about two extraordinary women from Washington’s past. Tickets are free, and you can attend from anywhere – because the show is presented virtually! 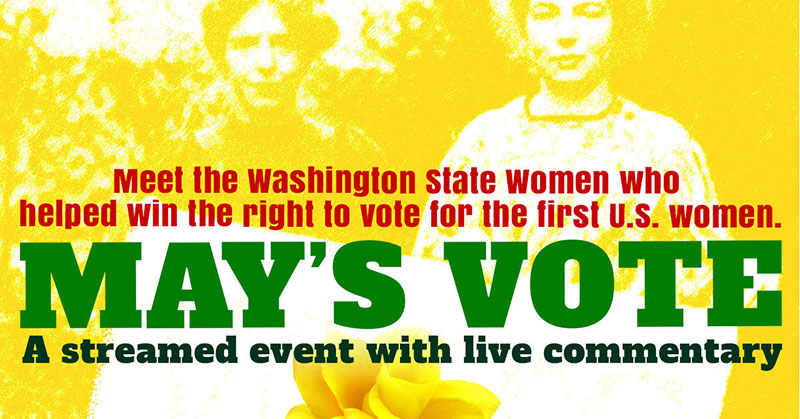 This month is Women’s History month, and it is appropriate to commemorate the crucial roles women have played in the history of our community. As our Museum celebrates its 30th anniversary this year and a strong commitment to preserving our heritage, we are excited to be partnering with Key City Public Theatre in Port Townsend to bring this performance to our community. We also have a strong partnership with the Quilcene Schools and are pleased to be bringing this performance to students and families.

Prim and proper Emma Smith DeVoe and outrageous, flamboyant May Arkwright Hutton worked side by side – but seldom eye to eye – to win the vote for women in Washington State in 1910. Emma and May were as different as night and day, which makes for a very lively play!

Emma, based in Western Washington, was a professional suffrage organizer trained by Susan B. Anthony. She believed that in order to win the vote, it was imperative to approach men in a ladylike manner: to “persuade them, convince them, argue their resistance down.” May, a Spokane millionaire who had struck it rich in the Idaho silver mines, thought the way to get the vote from men was to “clap ‘em on the back, pass out cigars, and swap stories with ‘em.”

Don’t miss your chance to get to know these fascinating women, and to learn about how our victory – ten years before most of the country – became a turning point in the fight to win the vote for women nationwide.

May’s Vote was mounted by Key City Public Theatre early in 2020, in honor of the Centennial of the 19th Amendment (and the 110th anniversary of Washington’s victory). Barbara Callander and Denise Winter were supposed to be touring throughout the state last year — until the pandemic hit! But like countless women who fought for suffrage for decades, they persevered, and last fall began touring a virtual version of the play.

Please join us online on March 28. The actors will give a brief live introduction before the performance and will be available after the show to answer your questions in what we expect will be a lively post-play discussion. Important Note: You must have Zoom installed on your computer or device to view the production. If you do not already have Zoom, you will be prompted to install it upon clicking the link to view the performance. Follow any prompts and you will be up and running quickly. Be sure to “arrive” early to ensure you don’t miss a thing!

Reservations for May’s Vote can be made through the Key City Public Theatre website:

Tickets are free. When you reserve tickets, you will also have an opportunity to donate to the Quilcene Historical Museum. May’s Vote is partially funded by the Washington State Historical Society, Humanities Washington, and the Port Townsend Arts Commission.

For more information about this program, please Click Here to email us through our Contact page or call (360) 765-4848. Or, scroll down to read some background information for May’s Vote as a supplement to the post-play discussion.

Learn About the Suffrage Train

The Suffrage Special Train brought women from across the country as delegates to the national convention.  When the train reached Spokane, its first stop in Washington State, those on board spent an entire day there, organized by May. They then continued across the state, making whistle stops in Pasco, Yakima, Ellensburg and Tacoma, before arriving in Seattle late on June 29.  The state convention was held on June 30.  The national convention ran for a week beginning on July 1.  Both conventions were hosted by Plymouth Congregational Church. In addition of Plymouth Congregational, the support of many other Seattle churches and ministers was enlisted in the planning of the conventions — see the July 4 HistoryLink article below.
Copied below are links to several articles from HistoryLink.org about the Suffrage Special Train, the 1909 suffrage conventions and Suffrage Day at the A-Y-P Expo. You can see other articles about the days before/after these by clicking the “Next entry” or “Previous entry” buttons on each page. All links open in a new tab.
June 28 – https://www.historylink.org/File/8522
“Prominent suffragists arrive in Spokane on June 28, 1909.”
[Suffragists on board are greeted by Emma Smith DeVoe, May Arkwright Hutton and other Northwest suffragists, including Oregonian Abigail Scott Duniway.]
June 29 – https://www.historylink.org/File/8517

“Suffrage leaders from around the country arrive in Seattle by special train on June 29, 1909.”
[Arrival of Suffrage Special Train in Seattle. Plymouth is mentioned at end of article.]

Also, check out the Suffrage Special Whistle Stop Tour Video series made this past summer by the Washington State Historical Society. Link to the series on the WSHS website:
https://www.washingtonhistory.org/event/the-suffrage-special-whistle-stop-tour/

The videos for Spokane and Ellensburg focus heavily on May Arkwright Hutton and Emma Smith DeVoe. Both include Denise Winter and Barbara Callander talking about the suffrage campaign and reading material related to May’s Vote. Direct links to those videos: