You are here: Home / About / History / Mansion Evolution / 5 Phase Project

Saving the Hamilton-Worthington House
• The museum hoped to use the dry weather of late 2015 to complete Phase II.
• As originally planned, Phase II would: replace the shell/siding where necessary, remove the roof, and replace it with a new third floor and Mansard roof. Very little interior work is planned for Phase II, including new plumbing and wiring.
• The lack of financing necessary to proceed in 2015 also delays finding a project manager and hiring a contractor.
• During the fall-winter of 2015-2016, the Raise the Roof Campaign is launched with a goal of $200,000 to allow Phase II construction to begin in April 2016.
• Three grants totaling $16,000 are awarded and included in the successful Raise The Roof campaign. Funders are: $10,000 – Norman Archibald Foundation, $5,000 – First Federal Foundation, and $1,000 – U.S. Bank Foundation.
• The Raise the Roof campaign reaches its goal of $200,000 allowing construction to begin in April 2016.

• Chuck Thrasher and Kathi Boyker agree to be Volunteer Project Managers for Phases II and III, applying their successful building career to the project.
• A competitive bid is developed and Dan Nieman Construction, Inc. is chosen as the contractor for Phases II and III.
• The Project Managers carefully coordinate volunteer labor with contracted services, resulting in time and cost savings wherever appropriate.
• The restoration of the Hamilton-Worthington House receives local, state, and national recognition as well as enthusiastic backing from many advocates of the project.
• We are still applying to foundations for grants, holding fundraising events, and making the current campaign Event Ready: Let’s Finish the Mansion our number one priority.
• For engineering simplicity and greater cost effectiveness, Phases II and III are combined.

• In a pre-construction inspection, lead paint is discovered covering the building’s shell and siding. This requires professional removal at a cost of $40,000 and the purchase of new siding at $78,000 – two unanticipated expenses.
• By adding the third floor and Mansard roof, the building’s shear walls have to be substantially strengthened. Permitting requires that the house have additional tie-downs with the foundation. These are additional costs.

• Once the project managers and the contractor are on board, it’s more efficient to complete the insulation and wiring from the outside of the house while the siding is off.

• With the mansion fully exposed, this is also the opportune time to join all of the outside and inside renovation funds into a final amount needed to make the mansion “event ready.”
• Experienced professionals donate their time and expertise to many aspects of the project, including but not limited to: the color palette of the house, kitchen design, and architectural and landscape advising.

We knew when we started that this would be a major project and have learned much along the way. Now we are moving forward with all deliberate speed with this campaign – Event Ready: Let’s Finish the Mansion! 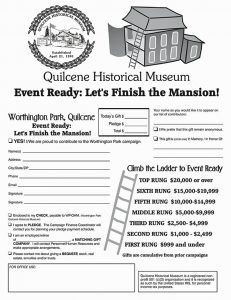 The sooner the Hamilton-Worthington mansion is available to the museum, outside organizations, and the community, the sooner we can turn our vision into a reality: To assure the preservation and promote the significance of our community’s unique history and culture for present and future generations.

To read a History Of Five-Phase Project, please scroll below the pictures.

Phase I – In July 2011, nearing the end of her life, Eilleen Worthington offered the Quilcene Historical Museum board a two-year purchase option to buy her residence – the 1892 Victorian Mansion, the 1915 barn, two outbuildings, and ten acres, some bordering the Little Quilcene River. Thus began the project called Worthington Park.

This capital campaign to purchase the property raised over $300,000, assuring that the Museum would own Worthington Park outright. Additional funds raised in that campaign were used to move the house off of its disintegrating base, perform major structural work, and return the house to a new foundation.

In order to fulfill preservation requirements, the Seattle firm of Tonkin Architecture was engaged to complete a Historic Structures Report as well as historical architectural drawings for the restoration.  In addition, planning for long-term sustainability of the property through future revenue generating venues, Property Counselors of Seattle was engaged to provide the basis for a formal business plan.

Phase II – the removal of the existing roof, returning the house to its 1892 look by restoring the third floor and Mansard roof, and removing and replacing the outer shell of the mansion, makes construction weather dependent. In December 2015, the museum was fortunate to have Chuck Thrasher and Kathi Boyker, recently retired to Quilcene, to serve as Volunteer Construction Managers. They bring their many years as owners of Edifice Construction in Seattle to this project. 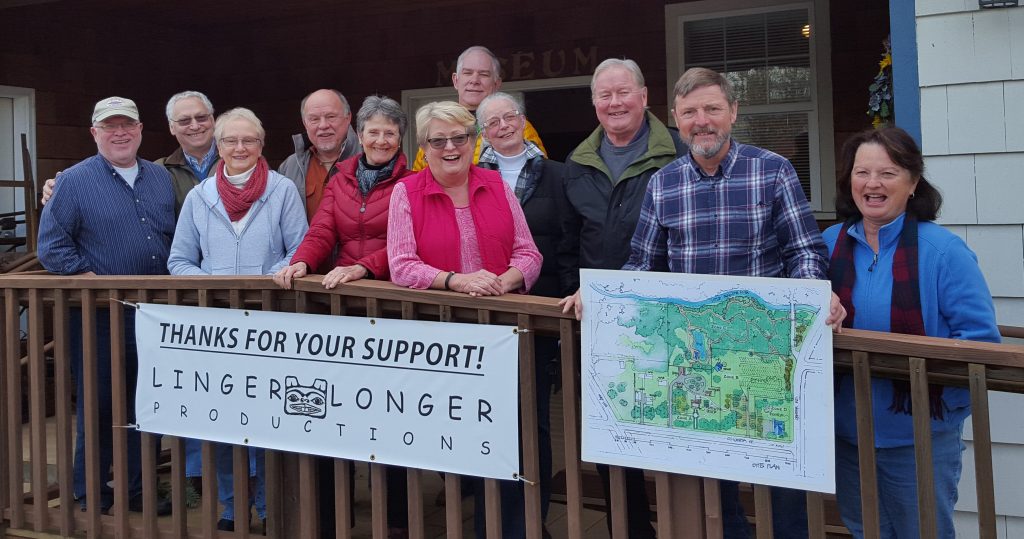